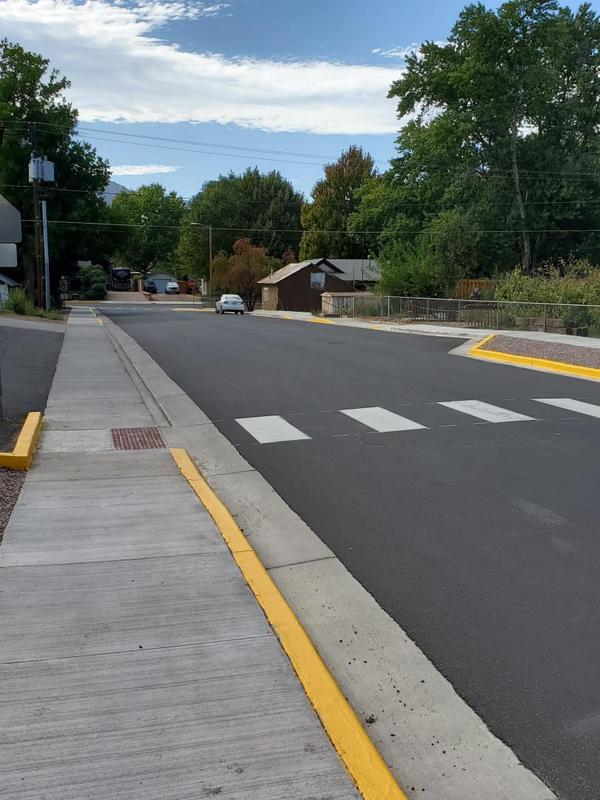 Posted October 3, 2019 - Retired Lincoln School Principal Tammy DeWolfe’s first thoughts when she was newly hired as the physical education teacher there 30 years ago were, “No grass? No sidewalks? How can that be?”

She said she had never seen an elementary school without grass on the playground or neighborhood sidewalks leading to a school campus.

“Something needed to be done,” she said.

The playground grass was installed years ago with school district funds, but this year, something major was done after the school was awarded a Safe Routes to School Grant during her last year as principal.

In August, sidewalk construction leading to the school was completed making pedestrian and bicycle travel safer for Lincoln families and staff. Combined funding from the SRTS grant and city road construction dollars made the project possible, DeWolfe said.

“It was an extremely competitive grant process,” DeWolfe said. “Fortunately, our project was selected for funding.”

Lincoln School of Science & Technology is located on Myrtle Avenue just east of the intersection of Myrtle and South Fourth Street. The corridor is busy with peak hours at school drop off and pick up times, as well as lunchtime for motorists and pedestrians. Both streets are narrow paved streets that had no curb and little or no sidewalk.

According to the SRTS project description, the road is heavily traveled by motorists and student pedestrians/cyclists.

“Conflicts between motorists and pedestrians are many due to the limited visibility caused by the narrow roads and parking along the edge of the pavement near the school,” the description states. “The school district has tried to man the crosswalks in the past with adult crossing guards but due to budget cuts, they cannot continue the practice. Additional police patrolling seems to only affect things short term during the enforcement period.”

The grant project focused on two goals: infrastructure and education.

Now that the project is complete, Lincoln School will increase the number of pedestrian/bicyclists traveling to and from school by more than 25% in three years with SRTS 5 E’s education. This will include the safe walking of 330 students/staff/parents (including those with significant disabilities) to and from community field trips six times per year, for years to come.

“They were very accommodating as the staff had to navigate unfinished streets to get to work in the week before students returned,” he said. “Now that the project is done, we have a fantastic infrastructure around our campus that has without a doubt allowed our walking students and their families to take a safer route to and from school each day.  Having clearly marked pedestrian crosswalks has increased safety, as well, and put our minds at ease as our students travel to and from school each day.”

Lancaster said DeWolfe was the driving force behind the project and did the bulk of the work to acquire the grant dollars. The city was able to bundle the SRTS work with utility and pavement reconstruction to make it a complete project.

“People who we have been in contact with are very pleased with the project,” Lancaster said. “Anyone interested in applying for an SRTS grant should contact their school who then, in turn, we will work with to make it a reality.”