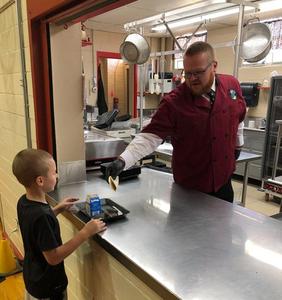 Posted October 21, 2019 - Scott Morton is in his third year as Principal of McKinley Elementary School.

Originally from Colorado Springs, Mr. Morton moved to Canon City as a Junior in high school. He is a proud Cañon City High School class of 1998 graduate!

After high school, Mr. Morton attended Pueblo Community College in hopes to become a welder. He worked in construction and then for the Department of Corrections. He says, "life threw me a curveball so I decided to go back to school to become a teacher." He enrolled at CSU-Pueblo with his sister who was also pursuing a teaching license. They had the exact same schedule and saved a little money along the way by sharing textbooks and travel costs. Mr. Morton says he was "lucky to student teach in Kindergarten at Harrison," fell in love with the grade level and hoped to find an opening in a Kindergarten classroom somewhere in Cañon City. When he earned his degree there were few openings in the area, but Mr. Dominick Carochi took a chance on him to teach 7th-grade Literacy and Social Studies at Fremont Middle School. Mr. Morton feels he found his niche but after four years in Florence, he was lured back home and to teach 7th-grade social studies at Cañon City Middle School. Over the next few years, he became interested in working with students and staff in a leadership role. He learned his craft working in the offices at CCMS and CCHS, but longed to lead his own building. He got that opportunity at Canon Exploratory School, but when the position at McKinley opened up and he took the opportunity to return to working exclusively with elementary students.

Mr. Morton says, "the most difficult part of being a principal is hearing the many heart-wrenching stories that staff members, students, and families share, but not being able to erase their pain." "I spend many sleepless nights replaying those scenes in my mind and searching for ways to support that individual."

Scott says, "the most rewarding part of my job is playing a part in students and staff reaching their potential. I absolutely love teaching, so becoming a principal allows me to work with children and adults every day."

Advice Mr. Morton would offer others who think they might wish to become a school principal? "Being a principal is the best job in the world! If you are interested, you should keep an open mind, never stop asking questions, and always take time to laugh."