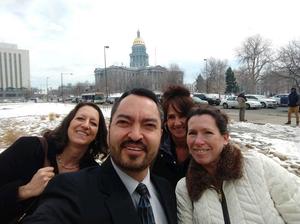 Posted October 23, 2019 - Brian Zamarripa is in his 7th year as Principal of Washington Elementary School. Raised in Cedaredge, Colorado, Mr. Z attended elementary, middle, and high school there, graduating in 1991.

Brian entered undergrad studies at the University of Northern Colorado in Greeley, majoring in Secondary Education with an emphasis in Mathematics and earning minors in PE and Coaching. He says, "after graduation, I began my career in education as a high school Math teacher and coach, teaching and coaching for eleven years before becoming a school administrator. During Mr. Zamarripa's seventh year of teaching, he began a Masters Degree program in Educational Leadership through the University of Northern Colorado, ultimately earning his degree in December of 2006. "The following year, I was hired as the Dean of Students at Cañon City High School, where I had already been teaching and coaching four years." "This gave me the opportunity to start on a path toward a principalship." Mr. Zamarripa adds, "the following year I was hired as the Assistant Principal and Athletic Director at Cañon City Middle School, where I served for two years." Mr. Zamarripa then had the opportunity to return to Cañon City High School as an Assistant Principal for two more years. These experiences helped him prepare for his current role as Principal at Washington Elementary School.

The hardest thing about being a principal? "Being the lone administrator at the elementary level and managing the broad scope of responsibilities that go with the role." "However, being responsible for making students smile, and working to help them overcome challenges and grow emotionally, academically, socially, and behaviorally, is quite rewarding!"

For anyone out there who thinks they might like to be a school principal, Mr. Zamarripa offers this advice. "Never lose sight of the reasons you became an educator, and continue to focus on those reasons through the work you do as a principal."