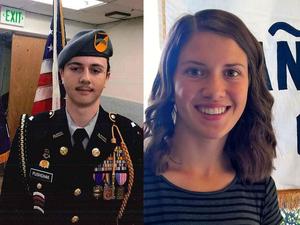 Cañon City High School senior Wil Pushchak is the Marine Corps League Student of the Month for September. He is the son of James Pushchak and Terri Huckaby and brother of Josh and Sarah Pushchak. He has been involved in JROTC for four years, technical theater for two years, the flyfishing club for one year and the Colorado Rod Makers Reunion for five years. He also has been on the rifle team, drill team and color guard. Pushchak was named Superior Cadet, was awarded for academic excellence and academic achievement and won the Military Order of the World Wars Award of Merit. Pushchak was involved in painting stakes for veterans’ graves and placing flags on veterans’ graves on Veterans Day. His hobbies include flyfishing and shooting. After graduation Pushcak plans to continue his apprenticeship as an electrician, pursue a degree in forestry or enlist in the U.S. Army.

Cañon City High School senior Laiken O’Rourke is the Rotary Student for Month of October. She is the daughter of Mike and Julie O’Rourke and the sister of Connor and Kiley O’Rourke. School activities include Student Council President, NHS Historian, 4-year varsity cross country runner, 3-year varsity tennis player, Pikes Peak Leadership Conference. Her GPA is 4.5179. O’Rourke’s honors and awards include 1st place, 3rd place Fremont Center of the Arts Show, 3 years Gold Honor Roll, Academic All-State Tennis, Sophomore Attendant, Junior Escort. She volunteers her time as a CCHS tutor, and with FAR, Shop with a Tiger and as a bell ringer for the Salvation Army. O’Rourke’s other interests include photography, being outdoors (hiking, kayaking, skiing) and art. After graduation, she plans to attend a 4-year university to major in Engineering.