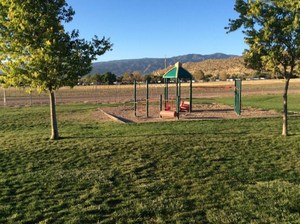 When Cañon Exploratory School completed its transition to a kindergarten through eighth-grade school last year, it was left with a problem: "There's nothing out on the playground for middle schoolers to do," said Carrie Hanenberg, the school's PE teacher and wellness coordinator.
Cañon City High School's annual Fall Pops Concert will feature some new guests on stage this year.

In addition to the school's Concert Choir and award-winning Encore! and Tiger Ladies, the senior class of the University of Northern Colorado's Musical Theatre Program, including 2013 CCHS graduate Alex Albrecht, will take to the stage at 7 p.m. Nov. 12 in the CCHS Auditorium at 1313 College Ave.

Tickets are $8 and are available now at the CCHS Activities Office.

"This is a really good opportunity; UNC is the best music theater school in the state," said director Todd Albrecht. "They only accept about 20 kids a year for music theater."

And more than half of those students will be here next week, offering Albrecht's classes a two-day workshop and master class, as well as performing with them in the Fall Pops Concert.

"This is a group of kids who are getting ready to go out and start careers in four months, and we get to work with them," Albrecht said. "I feel like we're getting a whole lot of great clinician time. My kids who are really thinking about going into performing, they can really see themselves in (the UNC students)."

When Cañon Exploratory School completed its transition to a kindergarten through eighth-grade school last year, it was left with a problem: "There's nothing out on the playground for middle schoolers to do," said Carrie Hanenberg, the school's PE teacher and wellness coordinator.

That's why in the last few months, the school has put its efforts toward applying for a grant through the Colorado Health Foundation. And for CES, those efforts have paid off — it learned in September that it will receive $170,000 to make improvements.

Construction on a new playground, which could include fitness stations and a walking track, is set to start in May.

Hanenberg, who wrote the grant proposal with former CES teacher Kelly Albrecht and Regional Wellness Coordinator Kristi Elliott, said the grant also will benefit around 1,000 other children who live in the same neighborhood as CES.

"Our northwest corner really doesn't (have) anywhere for kids to play," Hanenberg said, so the school decided to write a grant that would provide options for the entire community, even people who don't have ties to the school.

But for those older students, attending school in a former elementary school meant only having access to smaller playground equipment.

So, when Albrecht, who is now the dean of students at Washington Elementary School, learned about the grant, she and Hanenberg started working on an application.

In August, after Albrecht left the school, Hanenberg said she started consulting with Elliott to work out the grant application, which required the school to go through three phases of interviews and site visits before awarding the funds.

Part of that process, she said, included consulting with budget planners from the foundation, who encouraged the school to apply for a $200,000 grant.

Before that, the biggest grant Hanenberg had ever received was for $5,000.

When she got a call from the foundation, she said, "my mouth dropped. You know, I was so excited for the kids."

But before construction starts, there's still about a year's worth of work left, and part of that will include gathering community input, Hanenberg said, especially as the school plans to open the playground as a community park.

The school will host two playground grant kickoff meetings Nov. 11, one at 3:15 p.m. and another at 6:30 p.m. There, the school will gather information about planning, including which types of structures to include and where to put them.

"The purpose of this was promoting physical activity in kids on the playground, during school and on the weekends and having a nice place for them to go," Hanenberg said.

Sara Knuth: 719-276-7644, knuths@canoncitydailyrecord.com
Albrecht said the UNC seniors will join Encore! and Tiger Ladies in some special numbers prepared just for this concert, including numbers from Hamilton, Spring Awakening, and Ragtime.

"It's going to be an evening of amazing performances because these kids are really amazing," Albrecht said. "They are a wide range of voice types, they are suck kind kids, and they are so professional."

Proceeds from the event will be split between the UNC students' fund for their showcase performances in Los Angeles and New York, and Encore's fund for its annual competition in Denver.